In collaboration with the Financial Services Authority (OJK), the IFCC held a half-day seminar which was attended by around 150 people. This seminar aims to introduce PEFC / IFCC to wider stakeholders, namely to parties related to finance, such as: OJK, Bank Indonesia, bankers and financial services bodies. 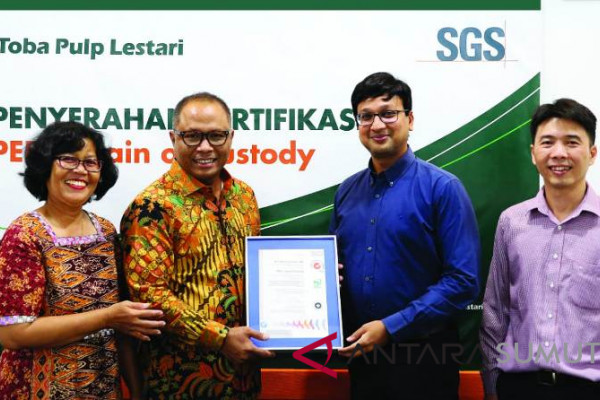 The beauty of Indonesia's forests has its own distinctive features and charms. Capturing it through photos is one of the ways to express its loveliness. IFCC Photo Contest titled "Explore Indonesia Forest with IFCC" was held from 22nd April 2017 (The Earth Day) until 5th June 2017 (The World Environment Day).

"We were surprised by receiving more than 200 photos within 2 weeks after posting the photo contest announcement. As this was the first national photo contest held by IFCC, that was very marvelous moment. At the end of the contest, we received 1,500 of beautiful moments captured by spectaculars Indonesian photographers. The judges worked hardly in selecting the best of the best photos and finally from those photo received, the best 5 photos was announced by IFCC on 18 July 2017", said Zulfandi Lubis, IFCC Executive Director.

Photo of 1st winner: “Our home”

Orangutan is the world’s largest arboreal mammal. They live in the canopy of tropical rainforest in Sumatra and Borneo. Listed by the International Union for Conservation of Nature (IUCN), Sumatran orangutan (Pongo abelii) is classified as critically endangered species. Yohan Roy Gratia, the 1st winner of IFCC Photo Contest 2017 “Explore Indonesian Forest with IFCC”, captured the moment of orangutan’s life in Bukit Lawang, Gunung Leuser National Park, Langkat Regency, North Sumatra Province, Indonesia. “Let us protect and preserve Indonesia's diversity and wealth,” he said. Yohan is a self-taught photographer who loves the beauty of nature. He hopes to travel around Indonesia to explore more beauty piece of nature by continuing his passionate work in the world of photography.

Photo of 2nd winner: “The life is beautiful”

The 2nd winner, Dika Yudha Rio Pamungkas, is a freelance photographer who has been doing photography since 2010. “Photography makes me feeling lucky to enjoy every single day by taking photos of natural scenery. Because, I believe that photography is an art of observation, about making something extraordinary,” he said. In this competition, he captured the moment of a family enjoying the beauty of Jumog Waterfall, in Karanganyar Regency, Central Java Province, Indonesia. This photo teaches us how to simply enjoy the day and feel grateful of life and nature. He concludes that life is so beautiful as the moment captured in this photo.

Photo of 3rd winner: “The harmonious co-existence between Waerebo native and the forest”

Suwandi Chandra, the 3rd winner, is a professional travel photographer from Medan, North Sumatra Province, Indonesia. His interest and passion in nature and adventure has brought him traveling around Indonesia and overseas to capture every single amazing and beautiful moment. His masterpieces in photography are often published in both printed and electronic media, such as: The New York Times, CNN.com, Lonely Planet, Garuda Indonesia Colors, SilkWinds SilkAir, Singapore Airlines Silverkris, Qatar Airways Oryx, and Jetstar Asia. In the IFCC Photo Contest 2017, Suwandi performed his photography showpiece by framing the aerial view of Waerebo Traditional Village located in deep inside of the forest at Manggarai Highland, Flores Island, East Nusa Tenggara Province, Indonesia. There, many locals are still living their life primitively and depending their aliveness on the forest. His picture titled “The harmonious co-existence between Waerebo native and the forest” has brought the judges to award him as the 3rd winner of the IFCC Photo Contest 2017.

Mushaful Imam is a freelance photographer who also often works as a journalist. His showpiece titled “Bird Migration” has taken him to be awarded as the 4th winner in the IFCC Photo Contest 2017. This bird migration moment was captured in Sembilang, Banyuasin, South Sumatera Province, Indonesia. The bird migration was happened over the top of mangrove forest. Muddy mangrove forest area becomes an option for the birds because of the abundance of food sources.

This picture was taken by Sapto Nugroho who works in the Air Force of Indonesia. His hobby in doing photography has persuaded him to participate in the IFCC Photo Contest 2017 “Explore Indonesian Forest with IFCC”. In this event, his photograph showpiece titled “Water Bombing” has been awarded as the 5th winner. He took the picture in Suligi Hill Forest, Riau Province, Indonesia. Water bombing is a type of aerial firefighting where the firemen are using helicopter to combat wildfires. Besides, helicopter water bombing is also performed for land maintenance especially during dry season.